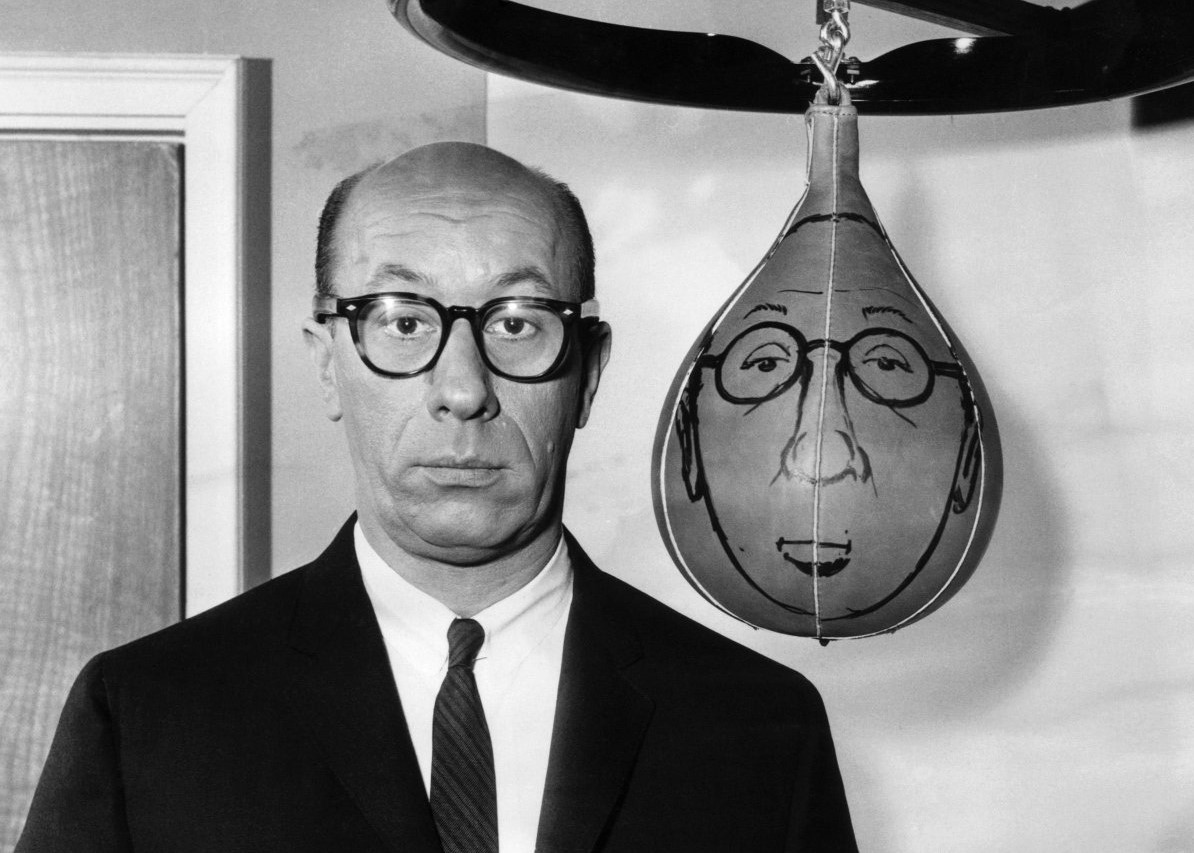 But he had a gift as an actor, one recognized by Helen Hayes who worked with Deacon on the stage early in his career and told him to pursue a career as a character actor, not leading man. Neither of them could ever have guessed how much he would excel at being a character actor.

Here’s an example. In the big-bug movie “Them!” (1954), he’s callously listed as Bald Reporter. (I know, it’s cruel.) In his single, short scene he towers over other reporters eager for answers about mysterious happenings. From the corner of the screen, the annoyed Bald Reporter leans in and demands to know why there is “a special press conference at 5 o’clock on a Sunday”?

That’s it. A sentence. A moment. Uncredited. But he got our attention. (And did anyone do quiet indignation as well as Deacon?) He may have been an uncredited actor, but when we watch “Them!” today, we get a kick out of recognizing Richard Deacon.

Yes, the world may recognize him as the put-upon Mel Cooley from “The Dick Van Dyke Show,” but there’s much more to him. He also was a dancer, gourmet chef and author. And with more than 100  film credits and an estimated 1,000 appearances on TV, his career was quietly remarkable. Let’s take a look.

Deacon was born May, 14, 1921 in Philadelphia. When he was 11, he was afflicted with polio and later took up dancing to help strengthen his legs. Perhaps because of these early health problems, Deacon wanted to go into medicine.

His family moved to Binghamton, N.Y. where he was a classmate of Rod Serling. He was an intern during high school at Binghamton General Hospital and served in the Army Medical Corps during World War II. After returning home, he studied medicine until he caught the acting bug and moved into drama, performing in some college and regional productions.

He left for the West Coast and spent time as a bartender before “uncredited” came into his life. His film roles were sometimes so brief you could blink and miss them like in the 1961 romantic comedy “Lover Come Back,” where he’s in and out in a flash as Dr. Melnick. In the 1954 crime thriller “Cry Vengeance,” he was seen mostly from the back of his head as bartender Sam. And in the forgettable 1957 remake of “My Man Godfrey,” Deacon has a silently droll stint as the by-the-books new butler for the eccentric Bullock family.

So that I don’t mislead you, Deacon had many notable scenes and roles, too.

In “Desiree” (1954), Deacon looks nothing like himself in the formal clothing of an 18th century gentleman, with a thick head of hair pulled back at his neck, and without the omnipresent glasses. He plays Etienne Clary, whose younger sister Desiree (Jean Simmons) falls in love with Napoleon Bonaparte (Marlon Brando). He’s very prim and lectures her on the dangers of strange men, the revolution and even wine. “Desiree does not drink wine yet,” he tells Bonaparte. (You can hear him say that in the formal cadence he speaks so well, can’t you?)

Though he’s only in two scenes in “Invasion of the Body Snatchers,” they are famous in that they were a new beginning and end that were added to the film to give it a more hopeful feel. Deacon is a doctor who, along with another great character actor, Whit Bissell, is treating a seemingly delusional Kevin McCarthy. Dressed in stark white from head to toe, the cynical Deacon chews on his omnipresent glasses, giving Bissell the side-eye after hearing McCarthy’s “pod people story.” It’s a small gesture to go with a small role, but it’s perfect.

For “The Birds,” Deacon removes his glasses and adds a mustache for a quick scene with Tippi Hedren that starts in an elevator and ends in a hallway. As Melanie, she’s dropping off two love birds for her new friend Mitch (Rod Taylor). Deacon, playing Mitch’s neighbor, first eyes Melanie with suspicion, then is happy to tell her Mitch has left for Bodega Bay and she shouldn’t leave the birds. He will be gone for the weekend, too, so he can’t help her, he adds. His odd pleasure in telling her this is one reason this brief interaction makes an impression.

Around his film performances, Deacon was even busier on television where he not only made one-time guest appearances and had recurring roles, he also made multiple appearances on the same show as different characters. His seven appearances on “The Jack Benny Program,” for example, included roles as a general manager, shirt salesman, barber and IRS agent. Similar to his movies, the TV shows were a diverse mix of comedy, westerns, drama and family fare including “The Donna Reed Show,” “The Charles Farrell Show,” “The George Burns and Gracie Allen Show,” “Date with Angels,” “Bonanza,” “The Rifleman,” “The Many Loves of Dobie Gillis,” “My Favorite Martian,” “Mister Ed,” “The Munsters” and so it goes.

He had his own episode of “The Twilight Zone” called  “The Brain Center at Whipple’s” where he was perfect as Wallace V. Whipple, a CEO who automates his company no matter what the human cost.

And it really speaks volumes about Deacon that his two longest and most notable TV roles – as Lumpy’s dad on “Leave It to Beaver” (1951-1963) and Mel Cooley on “The Dick Van Dyke” show (1961-66) – overlapped meaning he was working on two shows at once and did some film work during that time, too.

With all of that, however, I will always think of Deacon for the small roles he played in the 1959 drama “The Young Philadelphians” and the 1955 horror comedy mashup “Abbott and Costello Meet the Mummy.” Each time I see both films, I wait for Deacon to appear.

“The Young Philadelphians” is a favorite of mine, but I swear I watch it almost as much for Deacon’s small role as a humorless butler testifying in a murder trial, as I do for Paul Newman. (I said “almost.”)

Even just reading this line Deacon says as his character describes what he was doing the night of the murder makes me giggle: “I was having a light repast in the kitchen when the bell rang.”

He’s just so serious and even proud about his “repast” and subsequent testimony where he uses his ability to name a liquor by smelling it (it makes sense in the film) that I can’t imagine anyone else playing that role without making it a caricature instead of a character.

My favorite Richard Deacon part is his sizable role in “Abbott and Costello Meet the Mummy.” He plays High Priest Semu, the leader of the followers of the ancient mummy Klaris, and he wears the garb to prove it: tall hat, glittery cape, jewlery.

Klaris holds the key to unlocking the riches in the tomb of Princess Ara and Semeu is one of many out for the treasure. (Too bad Abbott and Costello are in the way.) I first saw this as a kid, so the combination of Deacon’s measured speaking, ultra serious demeanor and his fancy garb (especially that hat!) always made him slightly menacing yet cartoonish, which works for this fun film.

Outside of his acting career, Deacon was a gourmet chef and an early authority and proponent of the new “microwave cooking” technology.

He was a successful cookbook author and had his own syndicated cooking show in Canada. His “Richard Deacon’s Microwave Cookery” sold more than 1.7 million copies and can easily be found online.

In the 1970s and early ‘80s, Deacon continued with film and television work although at a lesser pace on such shows as “The Love Boat,” “BJ and the Bear,” “Match Game-Hollywood Squares,” “Family Feud” and “Piranha.”

He reprised his role as Mr. Rutherford for a 1983 “Leave It to Beaver” TV movie called “Still the Beaver” and planned to star in a subsequent series with the surviving cast members for The Disney Channel. Sadly, he died of a heart attack in August 1984 just before filming was to start in the fall. He was only 63.

His last film work appears to be “Bad Manners.” In Richard Deacon fashion, he’s listed as a ticket salesman. Looking back over his extensive career filled with so many no-name characters, that seems quite fitting.