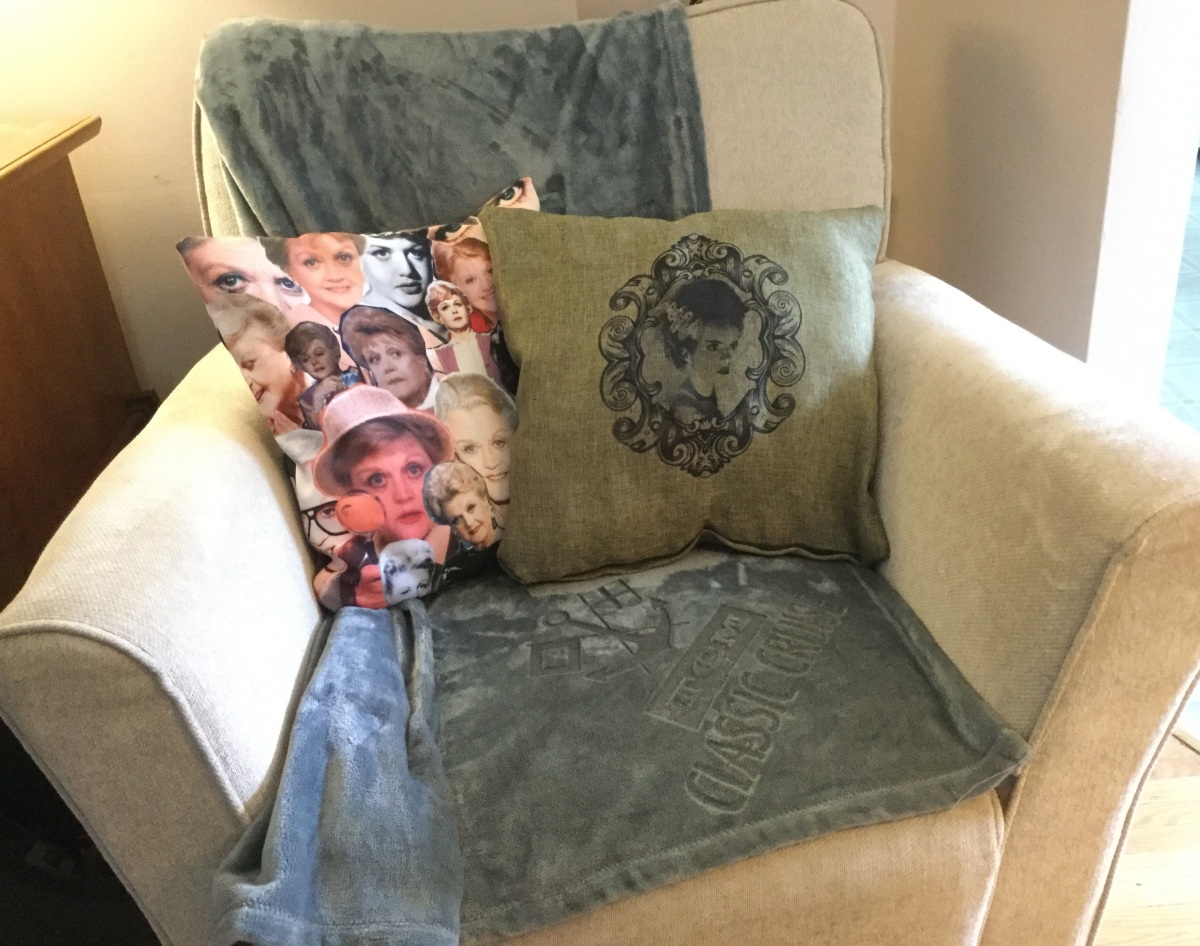 Ask me why I enjoy watching classic movies and the answer is a variation on a theme: Because classic movies make me feel like I’m wrapping myself in warm blanket or snuggling in a cozy chair.

They are, in a word, comforting.

So I found it interesting over the past few months as social media filled with people seemingly just discovering that movies can bring comfort. Don’t get me wrong, I love that people have sought out movies to ease their worries. But classic movies have done this for me as far back as I can remember.

Rainy days make me want to stay home, pull up a blanket and put on an old black and white movie. If I’m a bit down, a Technicolor film always lifts my spirits. If I’m tense, I watch something soothing like the ethereal “The Ghost and Mrs. Muir” or the fantasy of “Brigadoon.” Looking for inspiration, I’ll put on a Frank Capra movie. When I get home from a tough day at work, I turn on Turner Classic Movies and I start to wind down.

Often, the comfort factor is obvious as with my favorite romances that have me nestling in all warm and cozy. “Laura” with its beautiful score and Dana Andrews as the hardboiled detective in love with a portrait; “Dark Angel,” a sweet love triangle (yes there are such stories) with Fredric March, Herbert Marshall and Merle Oberon as inseparable lifelong friends who truly love each other; and “An Affair to Remember” where I can watch Nickie (Cary Grant) and Terry (Deborah Kerr) fall in love. (Let’s not talk about Janou; I’ll start to sniffle.)

Others films I find comforting will seem odd because of their genres, but they have that quality by transporting me to another time (“The Time Machine”), leaving me on the edge of my seat (“House of Wax”), mesmerizing me (“Sunrise”), making me laugh (“You Can’t Take It With You”) and scaring the heck out of me (“The Haunting”).

I’m sure this can be traced to memories of being introduced to classics by my family. I watched old horror films with my dad and any time I see one of the original Universal monsters or a 1950s creature feature, I relax which is a weird reaction to a horror film. Mom liked family-based films with “I Remember Mama” being a favorite. At grandma’s, we watched Bette Davis and Joan Crawford movies with the lights off.

“The Wizard of Oz” and “It’s a Wonderful Life” are childhood memories of time spent with the family when both movies were once-a-year television events. Sure, we watched sitcoms and regular TV programming, but the classics remain special.

So it makes sense that much of my comfort from classic movies comes from those memories, but it goes beyond that, toot. Watching a classic for the first time today still relaxes me, even when devil worshipers pop up in the  film noir “The Seventh Victim.”(Where did that come from?)

There are hundreds of films I could write about (I haven’t mentioned Angela Lansbury yet), but I’ll stop by offering a brief look at six of my favorite comfort films, the ones I’ve watched over and over and will continue to watch. Two films in particular, “Remember the Night” and “The Uninvited,” helped me put words to the question of why I love classic movies.

“The Enchanted Cottage.” Sometimes you need a fairy tale and that’s this sweet 1945 romance starring Dorothy McGuire as the “homely” housekeeper Laura and Robert Young as disfigured veteran Oliver who magically find a way to look past each other’s – and their own – physical imperfections. The idea of looking through the eyes of love may sound ridiculously corny, but wouldn’t it be nice to believe that others can see us for who we are on the inside, too?  Mildred Natwick is affecting as Mrs. Minnett, a war widow haunted by loss who owns the cottage.

“Jane Eyre.” “Jane … Jane … Jane.” I can’t think of this film without hearing the deep, mournful voice of Orson Welles as Mr. Rochester calling for his Jane (Joan Fontaine). Welles never looked more handsome in a movie and his imposing persona takes over the screen giving us a worthy personification as Mr. Rochester. He embodies the brooding Rochester as I envisioned him reading Charlotte Bronte’s Gothic romance, my favorite book.

“Mysterious Island.” I feel like a kid again watching this 1961 adaptation of the Jules Verne novel. It always sparked my overactive imagination as the wonders of the island – the giant chicken, crab and bees – were revealed. Then there was the arrival of Captain Nemo! I watched this repeatedly with dad and we were always excited like it was the first time. We passed the tradition on to my twin nephews and it became a favorite. It was a great day when my great-nephew became a fan, too. This was the film that introduced me to stop-motion marvel Ray Harryhausen.

“Picnic.” It’s the same reaction every time I watch “Picnic.” The train whistle, the swelling music, the gorgeous Technicolor and boom, I’m lost in Kansas, circa 1955. The small-town nostalgia, the budding romance of Kim Novak and William Holden, that darn dance. As I grew up, I realized there was a lot of sadness in the film and now clearly see that everyone is dealing with doubts or pain (poor Mrs. Potts!). But darn it, that dance is spectacular and will make you forget anything on your mind. Plus, I think there is a hopefulness to the film.

“Random Harvest.” Do you have films you wish you watched for the first time, every time? This is one of those for me. Though I won’t spoil the reasons why, there are two moments that still get me every time despite knowing they are coming. I am deeply moved by this film’s remarkable romance that exudes such a lovely warmth as it spans years in the lives of Paula (Greer Garson) and Smithy (Ronald Colman) who meet, fall in love and are separated by fate. (Pass me a tissue please.). My comfort is not only in their love for each other, but in the peaceful scenes by an idyllic brook and at their lovely little cottage. (I know I’m not the only one who has searched for a house like that.)

Speaking of Colman, when I hear his soothing voice, I immediately start to relax. I would love a recording of Colman or James Mason reading the phone book to help put me to sleep at night – it doesn’t get much more comforting than that.

“Remember the Night.” I pull the Christmas movie out a few times a year. Barbara Stanwyck plays a shoplifter whose trial is put on hold until after the holidays. Through circumstances, she is taken to the home of Assistant D.A. (Fred MacMurray) who takes pity on her, buys her dinner (at a fantastic  supper/dance club) and then drives her home to their mutual native Indiana. Whew. That plot would never work today, but that’s fine. I love that the film breaks the sentimentality meter, especially with the kindly mother and aunt (played by Beulah Bondi and Elizabeth Patterson). Often wearing shawls and always taking care of others by cooking fresh muffins or knitting socks, they made me feel like I was being cared for too, hence my description of classic movies.

“The Uninvited.” This poetic ghost story is another film that gave me words to describe my love for the classics. I vividly remember watching it the first time. The simple black and white opening credits rolled beneath the haunting “Stella by Starlight” and I was in love. Ray Milland’s voiceover about the “haunted shores” as waves ebbed and flowed, did it. I was hooked before Milland and Ruth Hussey, who played his sister, appeared. I moved to the couch, curled up and settled in to watch this film about adult siblings who buy a house on a seaside cliff with a haunted past. Sure, I was clutching the pillow a bit hard at points, but I was also smiling watching it all unfold.

I’d love to hear your comfort films, too – I’m always looking for a new one to watch. Send me a message here or on Twitter at @toniruberto.