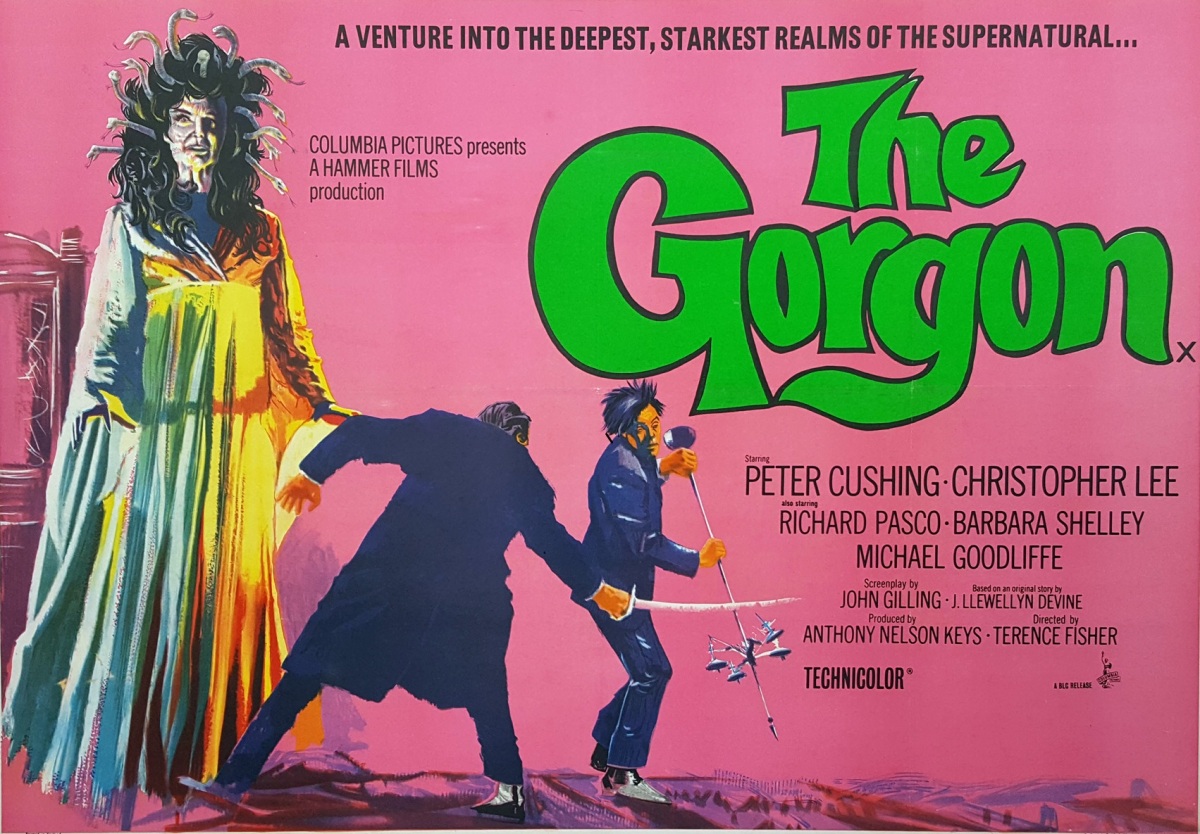 It was an easy decision to take part in the second “Great Hammer-Amicus Blogathon,” a celebration of two studios that have given so much to fans of horror and fantasy (like me).  Once again, the blogathon is hosted by Barry P of Cinematic Catharsis and Gill Jacob of RealWeegieMidget reviews. It’s a fun idea with such an abundance of options that it’s hard to choose just one movie.

My initial thought was to write about my favorite creature: the vampire. An important member of the Hammer family, the vampire enjoyed its greatest cinematic transformation under the studio where it was made over from feared beast to a sensual killer, setting a new tone for vampire films to follow. (Thank you Christopher Lee). 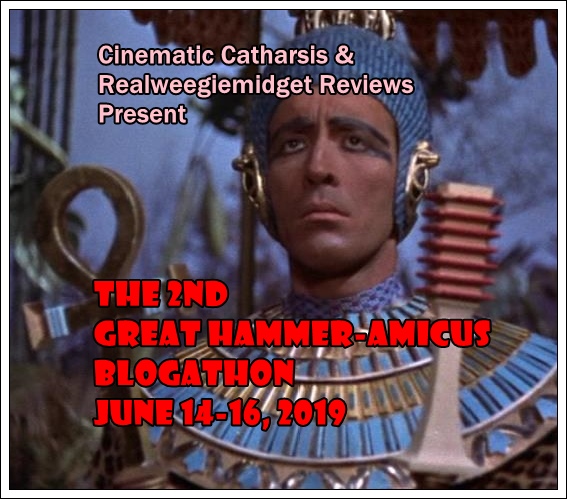 But let’s be honest – the vampire, mummy and werewolf get all the horror film love (and the bulk of the movies, too). So I thought about a creature that has yet to get its due and there was only one choice for me: the snaked-haired Gorgon from Hammer’s 1964 film “The Gorgon.” (How underrated is “The Gorgon”? Even one of the in-depth books on Hammer Films brushes off the film in six paragraphs!)

Just thinking about the Gorgon freaks me out.

Many film buffs know this creature as Medusa from the inventive work of Ray Harryhausen in the 1981 film “Clash of the Titans.” In Greek mythology, the Gorgones (Gorgons) were three winged sisters– Stheno, Euryale and Medusa. They had hair of living snakes and could turn people to stone.

In “The Gorgon” she is given the name Megaera (odd, since that is the name of the one of the Furies in Greek mythology).

But by any name, it is a magnificent creature. We are helpless against a Gorgon. Save your garlic and crucifix; your silver bullets, too. Traditional creature remedies don’t work.

It doesn’t matter how strong you are, how fast you are, how smart or clever or young or beautiful you may be. The Gorgon destroys with just one look.

That’s why I think this great killing machine is so underrated. Let’s take a look.

Hammer’s “The Gorgon” had a story synopsis from Canadian writer J. Llewellyn Devine that was “overhauled” by Jon Gilling with an uncredited rewrite by producer Anthony Hinds. It was directed by Terence Fisher, his first film for Hammer since the 1962 “Phantom of the Opera.”

As a double bonus it stars the magnificent acting team of Christopher Lee and Peter Cushing although sadly, they don’t appear together on screen until 65 minutes into the film. To make up for that, however, we are treated to a role reversal for the two actors. Cushing plays Dr. Namaroff, a cold and calculating man with a lustful side. Lee is a revelation as Professor Karl Meister, an unkempt man with thick hair, overgrown mustache and baggy clothes who is a bit of comic relief even though his character is very serious.

Read: Cushing and Lee: The dynamic duo of horror films

The film has all the quintessential Hammer elements: old European setting, a nubile young woman, creepy forests, a creaky castle and plenty of atmospheric chills.

In 1910, the small European village of Vandorf is being terrorized by an unknown ancient terror which seems to be settled around the Castle Borski.

We meet a young woman (Sascha) posing topless (the censors made sure we only see her from behind) for the artist Bruno Heitz. She is pregnant and pleading with Bruno to marry her. Though it is late at night, Bruno runs off (through the forest) to find Sascha’s father. Sascha goes after him – also through the dark forest. We know it won’t end well and we wonder why this couldn’t wait until morning. (This is the Hammer version of teens running back into the house in modern horror films.)

Then we hear a delicate sound – almost like a siren’s call. It’s something heard frequently through the movie – always at night, always when the moon is full. It is so light, we wonder – perhaps along with the unfortunate character on the screen – if we are imagining it. We aren’t, as Sascha tragically learns.

The next day, a police inspector arrives at the office of Dr. Namaroff (Cushing), a medical doctor who also runs an asylum. The inspector wants to discuss Sascha’s death. There have been 7 unsolved murder in 5 years. Is her death like the others, he wonders? The answer is apparent when Dr. Namaroff’s beautiful assistant, Carla (Barbara Shelley), bumps the covered corpse, breaking off a finger. It is stone.

“On a body that’s turned to stone?” Dr. Namaroff snaps.

(It’s just the type of dialogue we love in Hammer films.)

Bruno is found hanging from a tree and there is an inquest where Dr. Namaroff isn’t truthful about Sascha’s death, blaming it on head wounds caused by a metal instrument. The final verdict: murder-suicide.

The viewer isn’t the only one wondering why Dr. Namaroff doesn’t tell the truth. Bruno’s dad, Professor Heitz (Michael Goodliffe), knows it’s a lie and refuses to leave town until he clears his son’s name.

Even Carla asks the doctor why he said what he did. He, in turn, asks her  why she is so certain of Bruno’s innocence. She cryptically responds: “she has come back.” (Cue the creepy music.)

Professor Heitz pleads with Dr. Namaroff to help him absolve his innocent son, leading into one of my favorite bits of melodramatic dialogue.

“To the people of Vandorf, whatever this thing is, it is real. Something they can not mention because they dare not. They want to believe that it does not exist because the very admission of its existence only increases their fear. That’s why my son was branded a murderer. He at least was human, tangible.”

The professor, a student of mythology, then drops the bombshell: “Have you ever heard of Megaera?”

Of course our ears perk up at this mysterious name, knowing something good (or bad, depending on your perspective) is coming in the film.

Later, Professor Heitz hears that ominous female singing that draws him inside the castle where director Fisher swings the Hammer:  the wind picks up, leaves rustle, birds flutter about and small parts of the castle fall around him – all to musical cues. It is spooky.

Alas, he sees her (the image is murky to us, but we know it’s not good) and it’s too late. The professor somehow gets home to write a detailed letter to his son, Paul. “I am turning to stone….” it reads in part. (I don’t even want to think about what it feels like to turn to stone, but the filmmakers have put that image in our head.)

Paul arrives to learn his father has died from a “heart attack,” but he knows better since he has the letter. Now Paul is determined to learn the truth about his father and brother.

But slow down – first, he will meet Carla and the two fall for each other at first sight (in about 20 seconds), much to the chagrin of Dr. Namaroff.

Speaking of the doctor, there is an uneasy feeling surrounding him throughout the film as if he knows more than he is telling. He is often rubbing his face and looking worried. In one scene he tells an asylum worker: “There is a full moon tonight – don’t let her out of your sight.”

Who is Namaroff talking about? We’ve seen some of his patients, so this could be a few people. But this is a spoiler-free story so I will only say it is someone he believes is inhabited by Megaera who has now taken human form. (In this film there are different actors playing the Gorgon and the human character, so there aren’t any facial similarities to give it away.)

Unfortunately, it’s not long before we see a familiar scene, this time with Paul. The wind blows open the door, the music starts, winds pick up and heavy rain and lightning set the mood in the courtyard. (This never grows old for me.) A hideous reflection appears in the pool and Paul flees. Five days later, he wakes up under Dr. Namaroff’s care. He has survived the Gorgon by only seeing her reflection, but has aged tremendously and is haunted by nightmares.

Paul’s worst fears are realized when he digs up his father’s grave and finds a stone corpse. He vows to destroy the Gorgon. (Watching him caress his father’s stone face is one of a few unexpected sorrowful moments in the film.)

Rushing toward a finale

The movie gets a jolt of energy from the arrival of Christopher Lee as the disheveled Professor Meister who digs right into the mystery with Paul. The film up to this point was about setting up the characters and laying the groundwork for the ancient terror. It was atmospheric but done at a methodical pace so we could take it all in and get creeped out. For its final act, however, the film moves briskly.

Meister bulldozes his way through the village to find answers: he visits the police demanding information and breaks into the doctor’s office to read patient files. He quickly figures out the mystery of Megaera.

From here, all of the characters are engaged. Paul tries to convince Carla to leave with him; she becomes more frantic and frightened while Dr. Namaroff becomes more possessive of her. He rounds up the police to keep the young lovers from leaving. When he fails, he tries to have Meister arrested, leading the professor to jump out of a window to escape. (Yes, it’s amusing to see the tall and lanky Lee fit out the window.)

The closing scene aptly has the doctor and Paul fighting it out at the castle (cue the thunder and music this time), as Megaera looks on almost gloating at what she is watching. Hammer fans will surely notice that the weapons the men use (a sword and tall metal candlestick) often clash in the sign of the cross, a familiar image in Hammer films.

Can Meister arrive in time to help? Again, no spoilers here.

While the end battles are certainly exciting, it has often been noted (and it is hard to argue) that the Gorgon effects in this scene look too fake to be scary. I make up for that by using my imagination.

That doesn’t ruin the film for me. Even if the effects aren’t perfect, the idea of this creature is terrifying.

I recall seeing “The Gorgon” as a kid and immediately realizing its full, terrorizing power. Just looking at it means it’s over for you. No one can save you and it’s too late to run or hide. You can’t play dead because you already are dead – stone dead. This is why I find Hammer’s “The Gorgon” such a great, albeit underrated, monster film.

10 thoughts on “‘The Gorgon’: A look at Hammer’s most underrated monster”