So it’s great to celebrate these character actors through the “What a Character Blogathon,” again being graciously hosted by Kellee Pratt, Aurora Desmond,  Paula Guthat.

Here are links to the many appreciations written for the blogathon.

Here is the link to Day 1 of the blogathon, hosted by Kellee Pratt.

Here is the link to Day 2 of the blogathon, hosted by Aurora Desmond.

But where was I to start? There are so many character actors who deserve to be brought out of the background and into the spotlight that it is difficult to pick just one.

But when I thought of my favorite character role in a movie and the talented actress who brought it to life, the choice was clear: Verna Felton. Here is her story.

If I could own only one movie, it’s “Picnic.” I am easily swept up in the romance-filled 1956 Technicolor melodrama about a handsome drifter who disrupts lives in small-town Kansas. There’s so much to love about the film, but two things stand out: the iconic “dance” and Mrs. Potts.

On the surface, the sensual dance oozing with the chemistry of William Holden (as Hal) and Kim Novak (as Madge) seems to have nothing in common with the small role of the wholesome, matronly neighbor.

But “Picnic” is built on strong emotions and lives of quiet desperation. So while I may swoon eternally watching the blossoming romance of Hal and Madge, my feelings are even stronger for the plight of Mrs. Potts, touchingly played by Verna Felton.

I warmed up to her in her first scene when she meets the disheveled stranger, Hal, and insists on feeding him cherry pie for breakfast. I’m soothed by the tenderness in her eyes and voice as she comforts a friend. I’m elated when she proudly tells anyone who will listen that she is going to the picnic, too; yet a bit sad that this is all she has to look forward to in life.

But my heart also breaks for the  gentle older woman whose life is limited by caring for her invalid mother. And so I’m a mess – every time – when she opens the deepest part of herself and reveals her loneliness by telling her neighbor “Watching your two girls grow up – it’s made it easier.” Though quiet and restrained, the pain in her voice is palpable.

That’s Verna Felton. In small moments, in small parts and with great subtlety, she makes us feel an array of emotions without ever raising her voice.

The car ride to the picnic is a great illustration of that skill. Madge (Kim Novak) and her boyfriend, Alan (Cliff Robertson), are in the front seat. Madge’s mom, Flo (Betty Field), sits in back with her neighbor Mrs. Potts. Flo, worried that Madge is getting too close to the new stranger in town, quizzes Alan about his college days with Hal. Mrs. Potts quietly takes in the conversation and reacts only with her face – often mirroring what Madge (and the viewer) is feeling.

Here are three photos to illustrate.

Hal: “He could have been an All-American.” Notice how Mrs. Potts beams with pride as she reassuringly looks at Flo.

Hal continues: ” … but he flunked out his third year.” Mrs. Potts shows shock, sadness and empathy in mere seconds. (If Hal was in the car, I know she would hug him.)

Alan: “Not really.” Mrs. Potts’ face seems to be saying “told you so – Hal is good, he just needs a break.” (This look is so out of character for Mrs. Potts that now I want to hug her.)

An early start to a long career

Born July 20, 1890 in Salinas, Calif., Verna Felton was a natural entertainer. As a child, she gained the attention of a manager who saw her sing and dance at a benefit. But it wasn’t until her father’s death left the family broke that her mother let Verna join the road show company. She was only 7.

Throughout her 50-year acting career, many of her characters had similar “names.” Mother. Grandmother. Mrs. Aunt. And, in the grand tradition of character actors, simply “uncredited” for the brevity of the role.

But let’s move away from what we consider a “classic movie” for a moment, to savor the fact that some of Verna’s characters are a part of pop culture today. In fact, anyone with kids – or who is a kid at heart – probably owns a Verna Felton movie even if, like me, they don’t know it. As much as I loved Verna, I was missing some pretty impressive credits in her career. The Fairy Godmother? Pearl Slaghoople? Verna, you’ve been entertaining me since I was a kid!

…You’ve got Verna Felton who sang those whimsical words as the Fairy Godmother in Walt Disney’s 1950 animated “Cinderella.”

It was one of seven Disney animated films she starred in, also playing two distinct characters in “Dumbo” (Mrs. Jumbo and the Elephant Matriarch) and “Sleeping Beauty” (Flora the Red Fairy and Queen Leah), with roles in “Alice in Wonderful” (the Queen of Hearts), “Lady and the Tramp” (Aunt Sarah), “Goliath II” (Eloise, uncredited) and “The Jungle Book” (Winifred), her final role.

(Below is a YouTube tribute to Verna that shows many of her animated characters as she sings “Bibbidi-bobbidi-boo.”)

Even animated, Verna remained a character actress who often played mothers and other nurturing figures. And that made sense. While on film and TV she looked the part with gray hair pulled up and an apron often tied around her huggable figure, her distinctive voice made her a natural in animation and radio. Her voice was, after all, like a big hug on its own: familiar, warming, welcoming.

But lest I pigeonhole Verna as an actress who could play only one type of character, let’s look at other facets of her varied career.

She could be strong. As Mrs. August Pennyweather in the 1950 film “The Gunfighter,” she led a brigade of upset ladies to the sheriff’s office to ask – no, order – that action be taken against a gunfighter (played by Gregory Peck) who had returned to town. “Shoot him down like a dog,” Mrs. Pennyweather coldly demands.

She could make her presence known. Just listen to her growl out the lyrics of “Who’s Been Painting my Roses Red” as the Queen of Hearts in Disney’s “Alice in Wonderland.”

And she could make us laugh. Boy, could she make us laugh. Again, that exceptional voice came into play as she worked in radio from the 1930s through ‘50s on such shows as “Red Skeleton” (as Junior the Mean Widdle Kid’s grandmother, 1945-49), “The Jack Benny Program,” “The Abbott and Costello Show” and “The Great Gildersleeve.”

Radio also gave Verna her most popular character of Hilda Crocker in the 1952 radio comedy “December Bride.” (She starred opposite Spring Byington, who played her friend Lily Ruskin.) When the show was adapted as a Desilu TV sitcom (1954 to ’59), Verna’s surprising physical comedy skills were on full display.

One of the oft-told stories about Verna was how she insisted, at age 66, to do her own stunt in an episode that had her jump on a couch and propel herself out the window, ala “Superman.” It’s a hoot. (See it below in a clip also starring Spring Byinton.)

Verna earned an Emmy nomination for playing Hilda, in “December Bride, a role she continued in the sitcom’s sequel “Pete and Gladys” (1960-61).

With a healthy career on stage, screen, radio and in animation, in the end it was television that brought Verna the most recognition and acclaim. This  quote from director Joshua Logan about a public event in Kansas with the “Picnic” cast is very telling about Verna’s popularity. It’s from Fredrick Tucker’s biography “Verna Felton.” 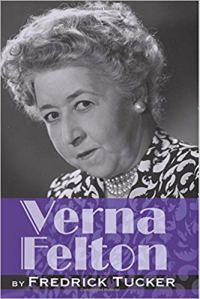 “I knew Rosalind Russell, Bill Holden and Kim Novak would get great hands,” Logan later told writer Bennett Cerf, “but the real roar went up when Verna Felton, who played a relatively minor role, appeared on stages. And hers was the autograph all the kids fought for later. When I asked if Verna came from the Hutchinson area, the answer was “Shucks, no. Everybody knows Verna because she appears on a regular TV show called December Bride!” Surveying the audiences’ zealous applause [Rosalind] Russell was heard to remark, “I’ve got to check into this TV things.”

Yes, people loved her in the 1950s, but what’s remarkable is we still love her for those same roles more than 60 years later. I wasn’t born when “Picnic” was made, but I have loved Mrs. Potts since the first time I saw the film. When I watch her, I think of how the world could use the kindness of Mrs. Potts as well as the warmth of Verna Felton. Sometimes, we just need someone who will make everything all better with a homemade cherry pie for breakfast, a reassuring word of comfort, or a comic tumble out the window.